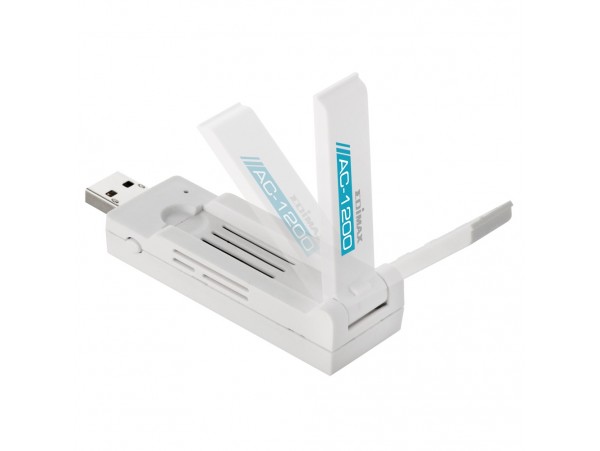 WorldвЂ™s Fastest - 802.11ac Truly Realized with USB 3.0
USB 3.0 is up to 10 times faster than USB 2.0 and specifies a maximum transmission speed of up to 5Gbps. Providing quicker data transmission times, and backwards compatibility with USB 2.0 (which specifies a maximum speed of 480Mbps), USB 3.0 is the new standard in connectivity вЂ“ enabling devices to achieve the superfast speeds which 802.11ac can provide. As the first 802.11ac USB adapter to offer USB 3.0 connectivity, the EW-7822UAC is the fastest 802.11ac USB adapter in the world.

*USB 3.0 is up to 10 times faster than USB 2.0 and specifies a maximum transmission speed of up to 5Gbps

Next Generation Wi-Fi Standard
The Edimax EW-7822UAC is the next generation of Wi-Fi adapter, compatible with the draft 802.11ac standard and delivering speeds of up to 867Mbps at 5GHz - almost three times as fast as 802.11n. The EW-7822AC is the first adapter of its kind to offer 802.11ac speeds together with USB 3.0 connectivity. Upgrade PCвЂ™s and notebooks to super high speed 802.11ac Wi-Fi and enjoy streaming video and data at speeds of up to 867Mbps. Download and Stream Anywhere
Use the EW-7822UAC to download and stream media from YouTube, Netflix or other services without waiting for buffering, or stream media across your network from a NAS (network-attached storage) at lightning speeds. Streaming HD movies or downloading is faster and more reliable than ever with 802.11ac Wi-Fi. 180 Degree Adjustable Foldaway Antenna
The EW-7822UACвЂ™s sleek design features an adjustable foldaway antenna, allowing users to adjust the antennaвЂ™s angle for optimum Wi-Fi performance and fold back the antenna to minimize size when itвЂ™s not in use.