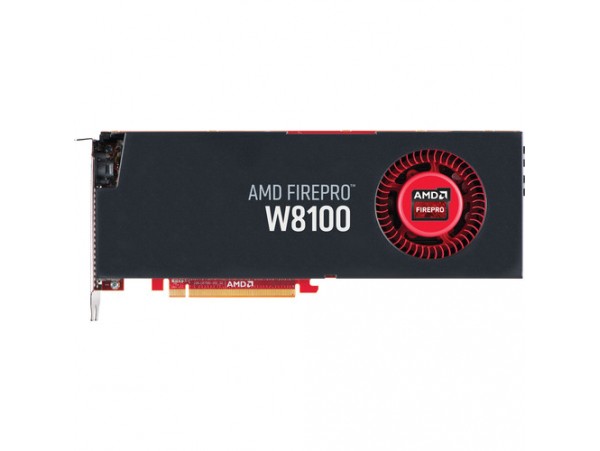 The AMD FireProв„ў W8100 workstation graphics card adds up to 4.2 TFLOPS of compute power to your graphics-centric workflows and comes equipped with 8 GB of ultrafast GDDR5 onboard memory.

The AMD FireProв„ў W8100 workstation graphics is based on the second-generation of AMD Graphics Core Next (GCN) GPU architecture and, like its predecessor, can perform graphic and arithmetic instructions in parallel. Compared to the AMD FirePro W8000 GPU, it now features four times as many compute engines (eight instead of two ACEs), resulting in significantly more computational performance.

Combine up to four AMD FirePro W8100 workstation graphics cards in a single desktop system and leverage the combined processing power for personal supercomputing or to work with multiple 4K video streams in real time, layer in effects, make color corrections and edits on the fly.

Enables professionals to tap into the parallel computing power of modern GPUs and multi-core CPUs to accelerate compute-intensive tasks in leading CAD/CAM/CAE and Media and Entertainment applications that support OpenCL. The AMD FirePro W8100 graphics card is expected to support OpenCL 2.0, allowing developers to take advantage of new features that give GPUs more freedom to do the work they are designed to do.

Allow users to work at a whole new level of speed and responsiveness. With a 512-bit memory interface and 320 GB/s of memory bandwidth, users can edit 4K video, layer in multiple effects and color correct on the fly, or load massive assemblies and data sets and manipulate them in real time.

Helps ensure the accuracy of your computations by correcting any single or double bit error as a result of naturally occurring background radiation. ECC support enabled on the external GDDR5 memory only.

PRT can utilize absolutely enormous texture files, up to 32 terabytes large, with minimal performance impact. PRT accomplishes this by streaming small bits of these massive textures into the GPU as needed, giving compatible applications a virtually endless supply of unique texture data.

AMD ZeroCore Power technology leverages AMD's leadership in notebook power efficiency to grant our desktop GPUs the ability to power down when your monitor is off, also known as the "long idle state."2

AMD PowerTune is an intelligent system that performs real-time analysis of applications that utilize a GPU. In the event that an application is not making the most of the power available to the GPU, AMD PowerTune can improve that application's performance by raising the GPU's clock speed automatically.3