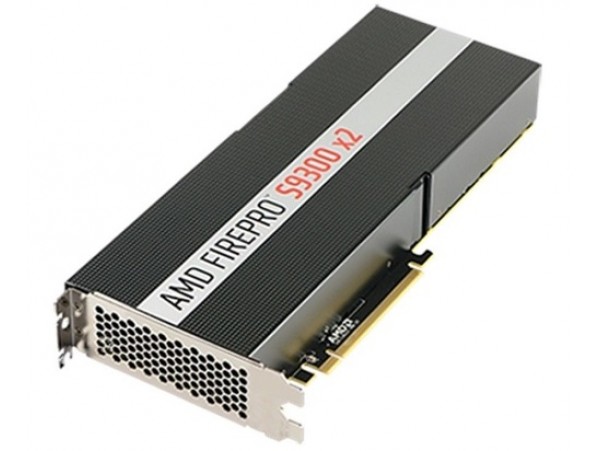 Based on third generation AMD Graphics Core Next (GCN) architecture, the AMD FirePro S9300 x2 server GPU delivers up to 13.9 TFLOPS of peak single-precision floating point performance вЂ“ more than any other GPU accelerator available on the market today for single-precision compute4. Compared to IntelвЂ™s flagship Xeon E5 CPU, the raw performance advantage of the FireProв„ў S9300 x2 GPU is even more dramatic вЂ“ over 15X the memory bandwidth and over 12X the peak single precision performance6.

A great accelerator is not complete without having a great developer ecosystem. With AMDвЂ™s GPUOpen Professional Compute software stack, the AMD FirePro S9300 x2 Server GPU utilizes AMDвЂ™s first open source LinuxВ® driver built specifically for compute, as well as support for acceleration using C++ in addition to OpenCLв„ў. Another benefit for those who have code in CUDA, is the ability to easily port the majority of their code over to C++, giving companies the freedom to choose between vendors.

Comprised of an open-source LinuxВ® driver optimized for compute, support for GPU acceleration using a new compiler to process code written in the C++ programming language, and other developer tools such as the Heterogeneous-compute Interface for Portability (HIP) Tool to port code written for CUDA to C++.

ROCm is built for scale; it supports multi-GPU peer-to-peer computing including communication through RDMA.

ROCm has a rich system run time with the critical features that large-scale application, compiler and language-run-time development requires.

Easily convert your code to C++ with this free, open source tool, while maintaining compatibility with CUDA compilers. The HIP tool allows developers to port the majority of their CUDA code over to C++ in a snap. Get started on the AMD FirePro S9300 x2 GPU, an open-source friendly accelerator from AMD, today.

Helps professionals tap into the parallel computing power of modern GPUs and multicore CPUs to accelerate compute-intensive tasks in leading CAD/CAM/CAE and Media & Entertainment applications that support OpenCL. The AMD FirePro S9300 x2 Server GPU supports OpenCLв„ў 1.2, allowing developers to take advantage of new features that give GPUs more freedom to do the work they are designed to do.

Developers who do not need the accuracy of 32-bit mathematical operations can now use 16-bit operations to help achieve high performance through a more efficient use of memory bandwidth and reduced memory footprint.

HBM is a new type of memory design with low power consumption and ultra-wide communication lanes. It uses vertically stacked memory chips interconnected by microscopic wires called вЂњthrough-silicon vias,вЂќ or TSVs, placed directly onto the interposer, shortening the distance information has to travel between memory and processor.

AMD PowerTune Technology is an intelligent power management system that monitors both GPU activity and power draw. AMD PowerTune optimizes the GPU to deliver low power draw when GPU workloads do not demand full activity and delivers the optimal clock speed to ensure the highest possible performance within the GPUвЂ™s power budget for high intensity workloads.5